The role of cultural heritage display after the earthquake in Nepal – The Architecture Galleries, Patan Museum, by Katharina Weiler

In the Kathmandu Valley, the disastrous earthquake of 1934 triggered a valley-wide process of rebuilding during the decade that followed. Through the lens of an art historian I undertook research in the noughties on this chapter of Nepal’s architectural history, which saw the promotion of the “Newar neoclassical” style. After the next devastating earthquake hit Nepal on April 25, 2015, I engaged in the Kathmandu Valley Preservation Trust’s (KVPT) “Earthquake Response Campaign,” documenting the rebuilding of the cultural heritage on Patan Darbar Square.

Patan Darbar Square is considered to be of “outstanding universal value” and has been on UNESCO’s World Heritage List since 1979. Here, the Charnarayaṇa temple (consecrated in 1565), the Harishankara temple (consecrated in 1706) and two arcaded platforms dating back to the fourteenth (South Maṇimaṇḍapa) and early seventeenth centuries (North Maṇimaṇḍapa) collapsed entirely. KVPT, an international private non-profit-organization dedicated to safeguarding architectural heritage in Nepal, coordinated the rescue and protection of these living monuments’ architectural fragments immediately after the earthquake. The Trust’s intention was to rebuild the structures to their original state while preserving original material at all costs.

The Architecture Galleries, curated by the same international team of architects that directs the rebuilding, form part of the Patan Museum, housed in the ancient Royal Palace flanking the Patan Darbar Square to the Northeast. In the light of the recent earthquake, the KVPT’s original museological approach to present a permanent exhibition illuminating the tradition of Newar Architecture is being revisited. Now, the Galleries bear testimony to the approaches of cultural heritage conservation in the framework of the rebuilding on the square. In 2018, my keen interest in cultural heritage, conservation, and museology made me connect the KVPT’s conservation efforts and curatorial practice to my own museological research. In this way, I came to explore the role of the display of cultural heritage after the earthquake.

The exploration of the museum space raised the question of how cultural heritage is being produced here, in the aftermath of the earthquake. How does the exhibition address the earthquake? What history is being told? And who are the ‘authors’ of this post-disaster narrative? The Architecture Galleries’ exhibits challenged me to contemplate contested concepts: ʻheritageʼ (a term that has no equivalent in Nepali language), ʻvaluesʼ (e.g. historic value, memorial value, spirit of place, authenticity), and ʻidentitiesʼ (e.g. national/international heritage, memory, loss, disaster) affected by the earthquake and projected onto certain cultural goods through different agents (local and international).

Bearing these issues in mind, I witnessed curatorial decision-making on the spot. Inside the museum, descriptive panels introduce the museum visitor to the architectural monuments on Patan Darbar Square and the history of their rebuilding, and explain the KVPT’s modes of conservation. In addition, decorative architectural fragments that are beyond repair are on view. Also, the interim restoration workshop with its working craftsmen can be visited on the site. In this context, a planned multimedia installation in the museum will soon pay tribute to the current re-evaluation of living traditions. In short, the exhibits communicate Patan Darbar Square’s history of destruction and rebuilding. They highlight the leading architects’ thoughts on diverse aspects of authenticity with regard to the tangible and intangible cultural heritage. At the same time, they emphasize intersections between seeming anti-poles such as ʻglobalʼ institutions and ʻlocalʼ communities, or ʻshared heritageʼ and ʻlocal inheritance,ʼ but also the boundaries cutting across them—after all, certain conservation approaches practised on site provoke a clash of cultural values.

The visitor to the museum is introduced to the KVPT’s rebuilding efforts as a joint heritage production: launched and enabled by outside interference, under the stewardship of a team of international experts, and primarily with significant financial support from abroad, rather than through any national or communal efforts; implemented by a team of Nepali architects, engineers, craftspeople, and scholars; based on concentrated negotiations.

What, then, is the role of display of cultural heritage in times of crisis? Well, if the earthquake destruction on Patan Darbar Square gives way to the rewriting of its history and recontextualization of its architectural heritage in the post-disaster context, the Architecture Galleries are in any case a medium that is well suited to document the KVPT’s transparent narrative. It sets out the ambiguous story of cultural heritage as being both a victim and a survivor, a story of loss and recovery. In this sense, the museum as a meeting place and open platform for exchange conveys to Nepali museum visitors and international tourists some of the prevailing cross-disciplinary cultural-historical discussions around cultural significance, conservation and rebuilding in post-earthquake Nepal and their relationship to change. 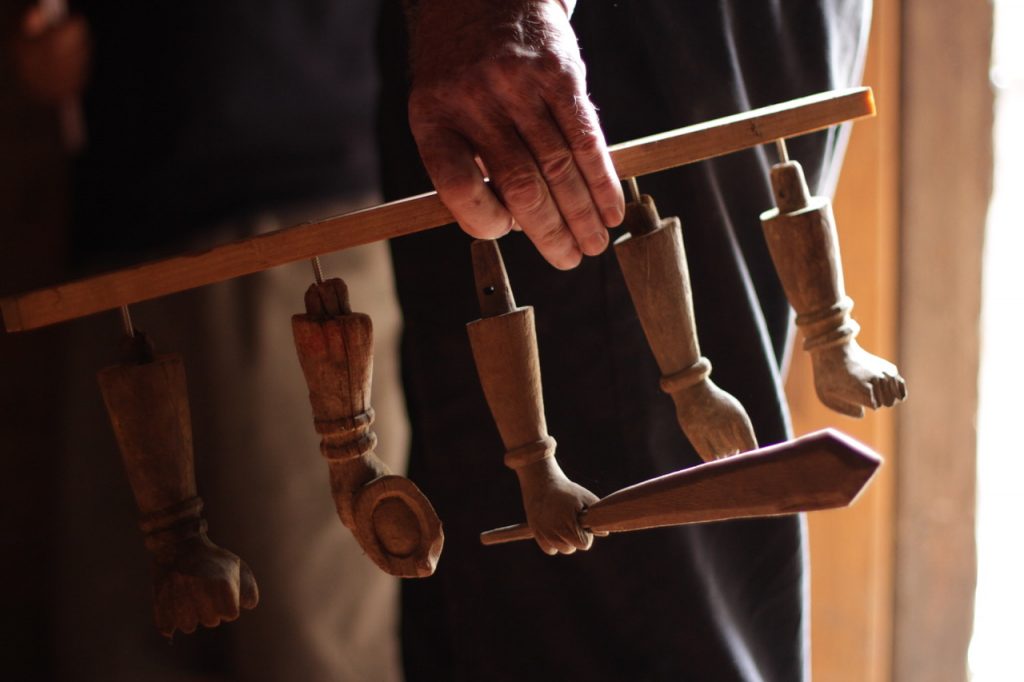 In preparation for an installation with 90 timber forearms inside the Architecture Galleries: The forearms belonged to the figurative roof struts of the three-tiered Harishankara temple. On April 25, 2015, the temple’s collapse mutilated their multi-armed goddesses and gods.The hands hold various objects with assigned iconographical meanings, here a sword (Skt.khaḍga). It is as yet impossible to pair up these fragments with the figures from which they originate, due to the lack of any documentation. The leading architects decided not to restore them based on speculative conjecture which would lead to the falsification of the iconography. While the figurative struts, even if partly mutilated, are reconstituted under the tiered roofs of the temple, the forearms are displayed in the museum. The installation bridges the gap between the respective exhibits and the actual temple site, keeping both parts in their damaged state – an associative reminder of the lethal nature of the 2015 earthquake.

Katharina Weiler. 2010. The Neoclassical Residences of the Newars in Nepal. Transcultural Flows in the Early 20th Century Architecture of the Kathmandu Valley. Dissertation. Heidelberg: Heidok (http://www.ub.uni-heidelberg.de/archiv/10691).